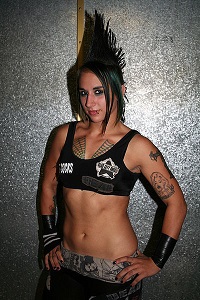 Christina Maria Kardooni (born August 28, 1989) is an American musician from Sacramento, California who turned to Professional Wrestling, becoming known as Christina Von Eerie. She trained in the Supreme Pro Wrestling Training Academy under Big Ugly, Danny Secretion, Bao Nguyen, Sir Samurai and Old School Oliver John, debuted in 2006 and got her start working in various California independent promotions before branching out to other parts of the U.S. and beyond. She has competed for Pro Wrestling Guerilla, AAA, SHIMMER, CZW, WSU, Dragon Gate USA, TNA (as Toxxin) and others. She is a 2x AWS (Alternative Wrestling Show) Women's Champion

with Alex Koslov and a Pro Wrestling Revolution Women's Champion