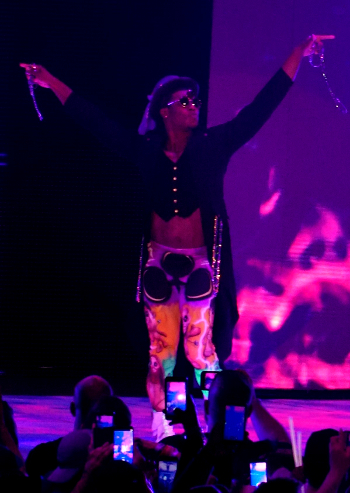 Patrick Clark Jr. (born August 19, 1995 in Washington D.C.) is an American professional wrestler formerly signed with WWE, where he performed in the NXT brand under the name (The) Velveteen Dream.

Clark started performing in 2014, at Maryland Championship Wrestling, becoming the first graduate of their wrestling academy alongside Ring of Honor Top Prospect Lio Rush, with whom he won the MCW Tag Team Championship. He also made appearances for, among other indie promotions, CZW, before appearing at season 6 of WWE Tough Enough in June 2015, being eliminated in the fifth episode due to a lack of humility. Four months later, he signed a developmental contract and was assigned to the NXT brand, debuting on television on July 20, 2016. March 1, 2017 was the last time "Patrick Clark" was to be seen.

On May 24, 2017, he debuted a new, flamboyant, Prince-based persona called "The Velveteen Dream". With this persona he became the NXT North American Champion in 2019 and had notable feuds with Aleister Black, Tommaso Ciampa, Johnny Gargano and Ricochet.

Real life trouble involving online interactions with members of the public saw his stocks fall dramatically in the company then on May 20, 2021, Clark was released from his WWE contract.