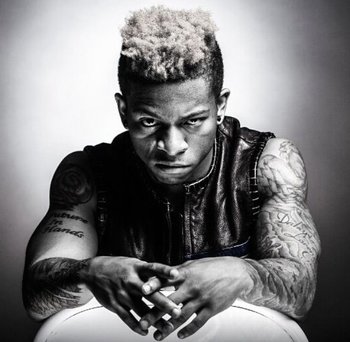 Everybody wants to rule the world.
Advertisement:

Lionel Gerard Green (born November 11, 1994) is an American professional wrestler, initially just known as Li Green, before becoming better known by the ring name Lio Rush. He is one of the first graduates of the Maryland Championship Wrestling school, alongside Tag Team partner Patrick Clark. He has wrestled in Canadian Wrestling's Elite, IPW UK, Rev Pro and Fight Club Pro in Britain, Over The Top Wrestling in Ireland, Lucha Liga Elite, The Crash and Chilanga Mask in Mexico, westside Xtreme wrestling Germany, most notably in CZW for his runs as Wired Champion, House Of Glory for winning the Elite Title belt and Ring of Honor where he won the 2016 Top Prospect Tournament, before leaving for WWE NXT. He is a one-time NXT Cruiserweight champion.

Following his release from WWE in 2020, Rush has made regular appearances on the indies, mostly in Game Changer Wrestling. He made his AEW debut at Double or Nothing in May 2021, competing in the Casino Battle Royal, and after a hiatus became All Elite in September that year.

Tropes of the Hour: