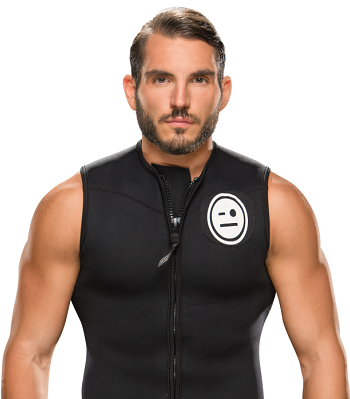 Johnny Wrestling!
"Be yourself, can't be no one else!
Another day, gotta give 'em hell!
It's burning straight through the dark
This rebel heart! This rebel heart!
Can't break what I've been building up this far,
Yeah, you'll never tear me a-part!"
— CFO$, "Rebel Heart"
Advertisement:

His relationship with WWE started in 2007, in the role of Cedrick Von Haussen, the "Champion of Liechtenstein", in an episode of WWE SmackDown, jobbing to Montel Vontavious Porter. In June 2015, he signed with WWE and began performing in the NXT brand, forming a Tag Team with Tommaso Ciampa called "#DIY" with whom he won the NXT Tag Team Championship in 2017. After their breakup, he began displaying all of what he's capable of, netting WWE two five-star matches, ending a drought of seven years. In 2019, after a harsh Face–Heel Turn, he captured the NXT North American Championship at NXT TakeOver: Phoenix and later captured the vacant NXT Championship at NXT TakeOver: New York, becoming the first NXT Triple Crown winner (the same match was also the first WWE match ever to earn a rating of 5.5 stars from legendary wrestling scribe Dave Meltzer).