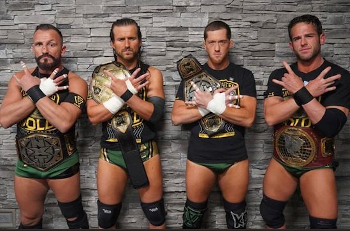 The stable was formed in August 2017, after NXT TakeOver: Brooklyn III, where Cole joined forces with the Tag Team formerly known as reDRagon (Fish and O'Reilly). Since then, the trio had a mission: to take over NXT, smashing other competitors and teams in the process. The stable was completed with the arrival of Strong, who betrayed his partner Pete Dunne in the finals of the Dusty Rhodes Tag Team Classic in NXT TakeOver: New Orleans on WrestleMania 34 weekend in 2018.

However, eventually the End of an Era loomed, as Adam Cole turned heel on his friends with a series of Superkicks that left Kyle O'Reilly and Roderick Strong feeling betrayed and the group in tatters. Bobby Fish was out with a tricep injury, so he missed this, and by the time he got back the stable was defunct. All four competitors continued to wrestle for NXT as singles wrestlers until August 2021, when Fish was released and Cole allowed his contract to run out without signing a new deal. Both men would later sign with All Elite Wrestling; individually at first, until Cole acknowledged Fish as an ‘old friend’ of his to The Young Bucks. Another one would soon follow: after departing NXT in December 2021, O'Reilly made his AEW debut by assisting Fish and Cole during a match the latter had with Orange Cassidy. Despite a seemingly rocky start to highlight that the last interaction between Cole and O'Reilly wasn't exactly friendly, it still marked the very first time all 3 founding members of the Undisputed Era not only joined forces, but did so outside of their old stomping grounds to boot. O'Reilly and Fish have now become associates of The Elite through their reunion with Cole, with their sub-faction now rebranded as "The Undisputed Elite".

As usual, you can find more information about them on that other wiki

The only worthy tropes are our tropes, and that, my friends, is Undisputed!