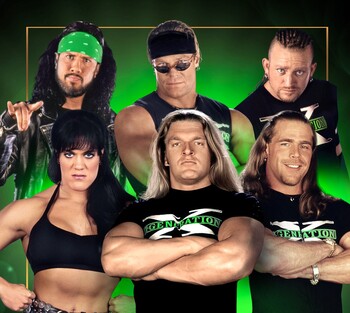 D-Generation X was a Professional Wrestling Power Stable that began in the Attitude Era of the Monday Night Wars (roughly late 1997) and ended in March of 2010, after many incarnations, with a one-night return in 2018. It also has close ties to The Kliq (due to Real Life Writes the Plot) and the New World Order (in the sense that both stables were very similar in their Refuge in Audacity tendencies).

Now, that's the boring answer. So, are you ready for the real description?

No, TV Tropes, I said, ARE YOU READY?

D-Generation X exemplified the Vulgar Humor craziness of the late 1990s WWF. Founded by Kliq members Shawn Michaels and Triple H, the faction grew in various incarnations to include Stephanie McMahon, X-Pac, Chyna, Road Dogg, Billy Gunn, Rick Rude, and Tori. As you can see, not every member of DX was successful, but its legacy and the lengthy bond between all (well, most) of them changed the careers of everyone involved and in many ways wrestling forever.