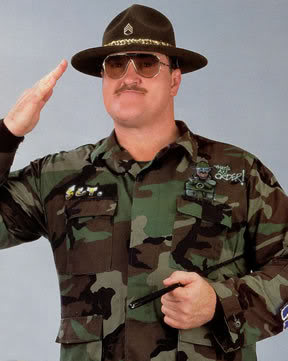 "...you're goin' nowhere space-case, you're here ´cause you´re AN INDUSTRIAL STRENGTH FOUL UP!!! My job is to whip you into shape, and I mean WHIP!!!"
"That man has the constitution of a vending machine!"
— Cobra Commander
Advertisement:

Contrary to popular belief, his character was one of the very few that was not a creation of Verne Gagne or Vince McMahon. When he arrived to WWF in 1980, they needed a great heel to give a good push. Quickly becoming the first contender, he created his famous "Cobra Clutch Challenge" offering a prize of $ 5,000 to anyone who could break it. It was not until his second return to the brand in 1983 that he really took off after soundly defeating the then top heel The Iron Sheik. However, Hulk Hogan was already the World Heavyweight Champion... so when he left to look for greener pastures, The Large Sarge turned into one of the top faces in business history until his third return in 1990.

In 1986, an alternate version of the Sgt. Slaughter character was incorporated into the GI Joe: A Real American Hero toy line as well as its animated series and comic books.

Among his in-ring achievements, he is a former x3 NWA Central States Heavyweight Champion