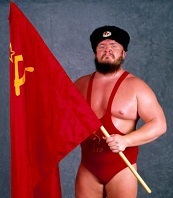 James Kirk Harrell (born January 29, 1959) is a retired American Professional Wrestler who competed for the National Wrestling Alliance as Pvt. Jim Nelson and for the American Wrestling Association and WWE as Boris Zhukov. He debuted in 1978 and worked for various territories before catching on in 1982 in Jim Crockett Promotions as Nelson, part of Sgt. Slaughter's Cobra Corps. He arrived in the AWA as Zhukov, a "Russian" gimmick. He switched to WWE in 1987 and teamed with Nikolai Volkoff as The Bolsheviks until Volkoff turned face in 1990. He left in 1991 and resurfaced in the independents many years later.

Among his in-ring achievements, he was a 2x NWA Alabama Heavyweight Champion