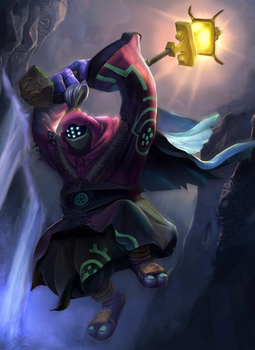 Don't ask Jax for a light.
"Here's a riddle: When is a croquet mallet like a billy club? I'll tell you: Whenever you want it to be."
— Cheshire Cat, American McGee's Alice
Advertisement:

The high probability your wackiest party member (like the Team Pet) will use some sort of bizarre and, well, improbable "weapon" — that is, in the sense of an object you could conceivably hit something with. And some of these "weapons" don't even go that far.

Many games also have a gag weapon for each of the party members, which is essentially an Improbable or Nerf Arm version of their regular weapon, like the following: a fan, a wooden sword for the sword-wielder, a broom for the White Magician Girl, or a squeaky-mallet for someone who normally wields an axe or hammer. Of course, this might end up subverted with an Infinity Plus One slingshot which fires dangerous marshmallows. Sometimes they may be Stat Sticks instead, things that are "equipped" as a "weapon" to give the user the stats but aren't actually used for attacking. Compare The Man Makes the Weapon for when someone deliberately use a gag substitute of a real weapon to showcase his skill.

This trope surprisingly isn't that far from reality and may be one of the stranger examples of Truth in Television. Martial arts weapons have included not just spears, swords, and knives, but farming tools, boat oars (see also Miyamoto Musashi), fans, metal rings (no, not even chakram, just round metal rings), and... small wooden benches? Hell, this doesn't even go into the military trench shovelnote which is actually fairly terrifying, sometimes featuring a saw blade edge or bayonette

For one-time examples, see Improvised Weapon. If someone manages to pull this off with an actual weapon, see Improbable Use of a Weapon. Compare Abnormal Ammo for improbable things you could throw/launch at an enemy. And Impossibly Cool Weapon for actual weapons with impossible (and cool) properties.