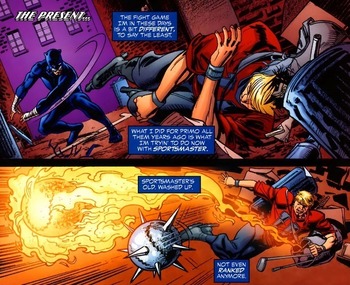 That's what I call a 'foul ball!
"I am. A servant. Of humanity. Wielder of. The rubber ball. You shall not pass!"
— Blunt, Freefall
Advertisement:

Balls are spherical objects often used for entertainment and recreation like in sports and such.

These things hurt when they are hurled at you at high speeds, so that makes them viable weapons, especially if they are made of steel (or lead, as with the case of muskets).

These balls are often used for Hyper-Destructive Bouncing Ball attack, but not always, especially if the ball can't bounce in the first place (like if it's too heavy or if it's a Ki Manipulation).

Crystal Balls are sometimes given this treatment. Related to I Know Madden Kombat, though only when the "non-combat sport" in question is a ball sport. Compare Epic Flail, which is any chain weapon with a weight on one end, which may be a ball, and Be the Ball, where someone becomes a ball and uses themselves as a weapon. May involve Shaping Your Attacks if the person has control of solid matter or Hard Light Energy Weapon/Ki Manipulation.

Can sometimes be countered with a bat. Can occasionally be launched from a Ball Cannon. May be the ball the Tennis Boss uses.

Guns and cannons shooting spherical bullets do not count (unless they're explicitly ordinary balls). There's a Trope for that somewhere in Guns and Gunplay Tropes. Actual weapons like bombs disguised/shaped as ordinary balls also do not count. Energy Ball examples only overlap here if they're used as blunt weapons and don't explode normally (i.e. it explodes only as a part of a special attack using the ball).