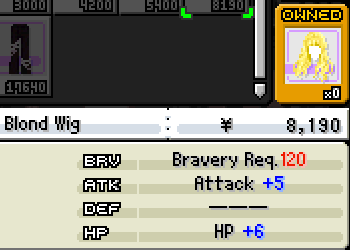 Maybe he braves through it. Maybe it's Maybelline.
Glasses from the Central Factory that for some utterly mysterious reason also block poison.
—The Legend of Heroes: Trails in the Sky SC's description of Moonglassesnote They also prevent blindness.
Advertisement:

So you're writing an RPG. You've already made the Balsa Wood Armor, the Steel Armor, the Gold Armor, and the Unobtanium Armor. You've made any number of things to hit enemies over the head with, from the Pointy Stick to the BFS to the Frozen Tuna. Your adventurers are fully clothed and armed to the teeth. So...what are you going to fill the rest of those equipment slots with?

Let's face it, strapping on more and more identical metal bits is boring, and anyway nobody really knows what a vambrace is. So when it comes time to flesh out the equipment in a game, just about anything will do. It doesn't matter what the item is, as long as it adds the right bonuses to stats to keep the game balanced (or otherwise). This leads to random items giving stat bonuses that make no sense—but which no one seems to question, because nobody wants to give up their precious items for the sake of mere logic.

There are items that have effects that can vaguely make sense, such as a stylish hat increasing your charisma, and there are explicitly magical items, such as a ring that increases your strength because it's specifically enchanted to do so. This trope is not about those; it is about the ones that, when you think about it, make you go, "Huh?"