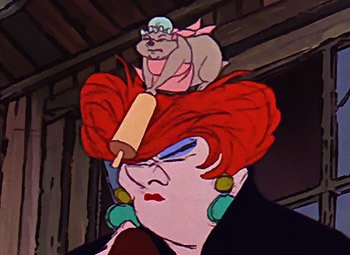 "OW! What did I do?!"
"When my husband drinks excessively, I may threaten him with this rolling pin, although we are still very much in love."
— One of the G-Men, Psychonauts
Advertisement:

The rolling pin as a weapon, often aimed at someone's head. Most often wielded by a cook, or else a woman (especially of the Apron Matron persuasion).

An Improbable Weapon, though one that does have reasonable efficacy. Closely related to the Frying Pan of Doom and often used in conjunction with it. Note that most of these rolling pins are made of wood, as plastic is usually too light to do any damage. A Henpecked Husband is a usual target of this in Domestic Abuse situations.