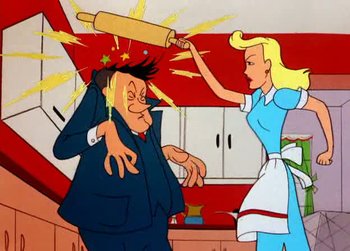 "Wild Wife" is a 1954 Merrie Melodies one-shot cartoon directed by Robert McKimson. Featuring none of the staple characters, it is instead a darker (and, in hindsight, somewhat progressive) take on the stereotypical human television couple of the era.

Marsha, a housewife, is exhausted and slumping in an armchair when her pipe-smoking husband John comes home. The very first thing he asks is if she did any of the chores. She replies that mowing the lawn was the only chore that didn't get done. After John makes a sexist remark about how women (at least, at the time this cartoon was made) have all the time in the world and can never get anything done, Marsha recounts her day to show what she normally goes through:

Despite all of Marsha's accounts of her day, John remains unimpressed — until she answers that she did indeed get him something. It turns out to be a wooden rolling pin, which she uses to knock him out for his putting her through all that trouble and then showing zero appreciation for it afterwards.

Bea Benaderet was the (uncredited) voice of Marsha.