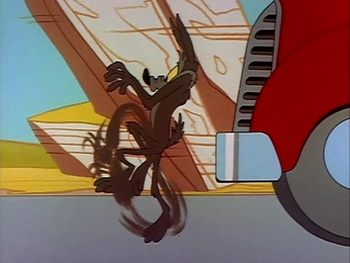 Wile E. Coyote starts another pursuit on the Road Runner, but the chase soon ends when a truck nearly runs the Coyote over and causes him to run off a cliff. Then, after failing to scale the cliff that he smacked into to reach the Road Runner, who is standing atop of it, he initiates new unsuccessful plans, like shooting himself from a bow, a grenade on a model airplane, a wedge that will throw a boulder, bird seed mixed with iron pellets as well as a magnet on a fishing line, two cannons and smearing the bottom of his feet with axle grease.