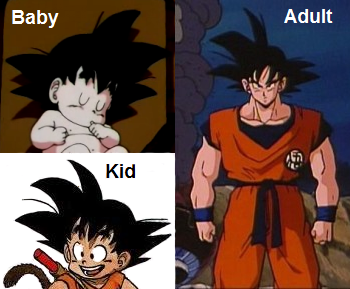 Vegeta: A pure Saiyan's hair does not get "shaggy". It maintains the same shape from the day that he is born!
Goku: Huh! What do you know? I never noticed!
Bulma: You never noticed you never needed a haircut?
— Dragon Ball Z Kai
Advertisement:

Hairstyle Inertia is the phenomenon where adult or teenage characters who Flashback to a time in their childhood are frequently shown to have the exact same hairstyle, though those with long hair usually have shorter — but not short — hair. Pigtails, ponytails, braids, or other hairstyles that require long hair are also shown to be stubbier and shorter; is often used for Spinoff Babies.

It is not an Important Haircut — those happen in series and are, as the title says, important to the plot. It is also not an Expository Hairstyle Change, which usually does not flashback to a character's childhood. This trope deals only with characters keeping the same hairstyle from childhood until the present time. The opposite of this trope is Hair Today, Gone Tomorrow. This trope can be the opposite of the Funny Flashback Haircut, but also an example if the unchanging hairstyle is used as a joke.

Additionally, this trope sometimes applies to some characters in a work of fiction, but not to others.

Similar to Same Clothes, Different Year, only with hair.

And, barring the flashback, this may be Truth in Television, but just as likely is not.

The usual reason is a distinctive hairstyle can be a quick characterization trope, especially in Anime, Manga, Comic Books, and Western Animation, therefore it can be a shorthand to say this younger/older character is the same person.