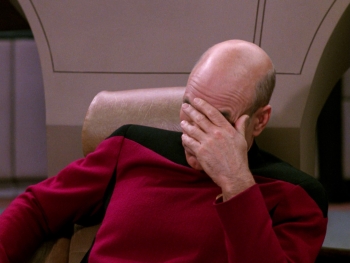 I take my eyes off you people for five minutes...
"Why's your forehead all red?"
— Katara, Avatar: The Last Airbender
Advertisement:

So you're the Only Sane Man, and the lunatics around you are once again doing something to make you question your faith in humanity. *sighs* It may not solve anything, but raising your hand to your forehead will have the dual benefit of temporarily obscuring your vision of the idiocy as well as cradling the oncoming headache. Variations occur, from pinching the bridge of one's nose to slapping one's forehead (basically a Dope Slap to oneself for the "idiocy" of putting up with this mess). One may also follow up the slap with sliding the palm of the hand down one's face, possibly with a look of exasperation. If they're wearing a hat, expect them to pull the brim of the hat over their eyes in disgust. If they're wearing a cloak or a hoodie, then they're pulling the cowl before their face.

Sometimes, there is a distinction between the forehead facepalm (for irritating moments) and the full-face version (humiliation). There's also the Double Face Palm, which is grasping one's head with both palms, as Picard does

in "The Offspring"; this one is far more commonly associated with embarrassment. Some people even have gone meta, inserting "*picture of French Enterprise captain*" in their forum posts.

Of course, it's also prevalent in Real Life. It's universal; a wide range of cultures, and even animals capable of reaching their faces with their arms/forelegs, seem to have some variety of this.

It may be accompanied by the line "That's the Stupidest Thing I've Ever Heard!" It may also be combined with I Need a Freaking Drink. Applying a Dope Slap is often a form of ready relief for the headaches that cause a Face Palm.

A Sister Trope to Head Desk (in particularly extreme cases, these actions can also be combined to perform a *facepalmheaddesk* maneuver), Face Fault, Disapproving Look (also known as the "Implied Facepalm").

Compare Surrounded by Idiots, Only Sane Man, The Take.

Not directly related to Facepalm of Doom, in which one attacks by placing one's palm on someone else's face.

This happens when Frank attempts to get the gun from Rocko while holding onto the bomb in the envelope only for them to switch places causing everyone including the audience to facepalm.

This happens when Frank attempts to get the gun from Rocko while holding onto the bomb in the envelope only for them to switch places causing everyone including the audience to facepalm.