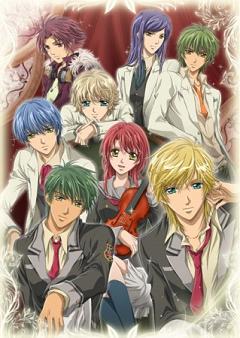 Being surrounded by cute boys... every fangirl's wet dream.
Advertisement:

La Corda d'Oro (The Golden String) or Kin'iro no Corda is a series of Otome Romance Games developed by Koei with a manga and anime adaptation. The anime adaptation gives a face to the nameless protagonist in the form of Hino Kahoko, an Ordinary High-School Student who was given a magical violin by Lily, the spirit of the school.

A mobile game entitled Kin'iro no Corda Starlight Orchestra was released in April 2021 and features yet another protagonist and cast, marking the third generation of characters.