Manga / Faster Than a Kiss 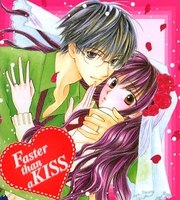 Sixteen-year-old high school student Fumino and her little brother, Teppei, have been in and out of relatives' homes since their parents died, and she's tired of it. She decides to take her brother and run away, but before that happens, she is confronted by her teacher, Kazuma, in a park. When asked what he can do to help, she explodes and tells him she doesn't want any vague sympathy, asking him to marry her and take care of them. He accepts, and she begins her life as a teenage housewife. The problem? If the school finds out they're married, Kazuma will lose his job!

The series mainly focuses on the relationship between Fumino and Kazuma, and has concluded after 12 volumes. It ran from 2007 to 2012.