Manga / From Far Away 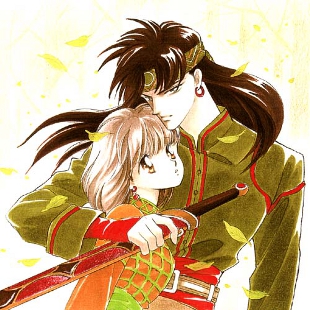 From Far Away (Japanese name Kanata Kara) is a shoujo manga by Kyoko Hikawa, which ran in LaLa from 1993 to 2003.
Advertisement:

The story is about an Ordinary High-School Student named Noriko, who is whisked into a magical world filled with dragons, deerlike horses and a world populace in fear of a being called the Awakening. The Awakening is foretold to awaken a destructive being known as the Sky Demon. All of the nations of this world are racing to find the Awakening and to use its powers to control the Sky Demon.

Noriko, shortly after falling into this world, is quickly found by a man named Izark, who, initially against his wishes, takes up arms to protect the young girl. The story takes off from there, focusing on Noriko's troubles of learning about this dangerous world, its language and why her unwilling protector really doesn't like being around people.

From Far Away contains examples of: