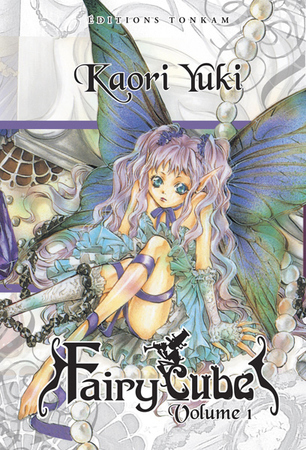 Fairy Cube is a manga by Kaori Yuki which ran in the shoujo magazine Hana to Yume from 2005 to 2006, with its chapters comprising a total of 3 Volumes.

Ian is the son of a famous author and known as a liar by most, especially about his crazy stories about fairies and other fantasy creatures. He is constantly followed by his alter ego, whom he dubbed 'Tokage' (Lizard) as his green hair and red eyes reminded him of the reptile. The only person who ever believed Ian about the fairy world that surrounds them is his childhood friend Rin, who only recently returned to her hometown.

Shortly after, when Ian sees a strange man named Kaito at a crime scene of the recent string of 'Fairy Murders', he's given a Fairy Cube and is told to take good care of it. After Rin is accused of having something to do with the Fairy Murders, Ian goes to help her and is promptly stabbed by his father.

Now a mere ghost, Ian realizes that Tokage has taken over his body and the only way to get revenge is through Kaito's help, by becoming a 'Winged One' and Ian swears to get his body, and Rin, back from Tokage.