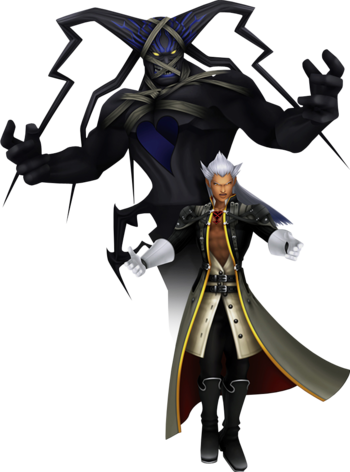 Even villains have Guardians.
Zodon: Incredible! I wasn't able to get three feet before the sensors defeated my last cloaking device.
Ambriel: It's what I do.
Tyler: How do you do it?
Ambriel: I told you; no one knows. Something keeps me safe. That's why they call me "Guardian Angel".
— PS238
Advertisement:

The Guardian Entity is a being that protects their ward from harm. Usually, they spend most of their time floating invisibly and intangibly, preferring to subtly steer harm away from their ward, and only materializing when necessary. But when they do appear? They will lay a smackdown for their trouble.

Their nature can vary quite a bit. Usually they're benevolent, but of course, that may not extend past protecting their ward so they can fulfill a dark fate. They may be the ghost of a loved one, a fey entity that torments and protects in equal measures, a classic Guardian Angel, or a demonic entity there to protect the Antichrist. Depending on their nature, the entity and ward will have a very interesting relationship, but it's not impossible for a really subtle entity to avoid being noticed at all by their ward.

In terms of strength, it might only be able to nudge butterflies, or fully embody the Hyper-Competent Sidekick and bring down the Wrath Of God/Satan/Crystal Dragon Jesus on those who look funny at their ward. Speaking of that, the Guardian Entity is often its own master rather than completely subservient to its ward; in such a case, while it may take some input from said ward, it chooses who to hurt and how to do it all on its own. This can be especially nightmarish for the ward if they are psychotically overprotective, and oversensitive or inscrutable as to what they consider "threats" to their ward.

See also and compare The Kid with the Remote Control, where the ward actually controls the entity, which is corporeal and Kid with the Leash where the entity has evil/violent tendencies kept in line by his ward. May overlap with Fighting Spirit in some instances, and may also be a Friendly Ghost. Also related to Familiar, Hypercompetent Sidekick, Chessmaster Sidekick, Mon, Guardian Angels, and Fairy Godparents. Threshold Guardians may be this if fully aware of their role as "Obstacle to ensure that character is strong enough to face what's after them."