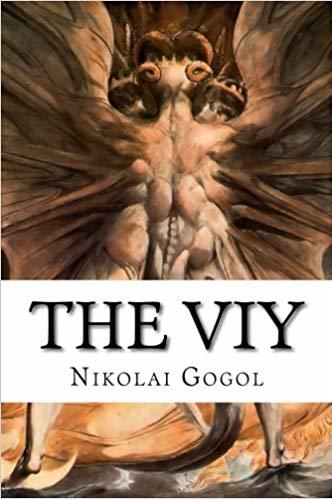 "Viy" is a hair-raising Gothic Horror novella, written in 1835 by Russian-Ukrainian writer Nikolai Gogol and published in his short-story collection "Mirgorod". It is considered to be one of the best-known works of the author.

The novella opens in Kiev, when the students of local seminaries are leaving for summer vacations. Three of them, a philosopher, a theologian and a demagogue, trail off the road, get lost in the middle of nowhere and stumble upon a small farm. There they meet an ugly old woman, who reluctantly allows them to spend the night inside, but in different parts of the farm.

In the middle of the night one of the students, philosopher Khoma Brutus, receives a visit from the old crone. Initially he interprets his hostess' intentions as a come-on. Afterwards (and too late), Khoma realizes the old woman is a Wicked Witch. The witch (literally) mounts Khoma and forces him to carry her through the night around the countryside. Khoma manages to break the crone's influence by praying and then giving her a good ass-kicking. To his horror, the old witch transforms into a heavenly beautiful young girl. Scared out of his wits, Khoma runs back to Kiev and tries to forget the whole adventure.

But the next day a group of cossacks arrive. The rector of the seminary tells Khoma that the daughter of a wealthy old cossack lieutenant had recently returned home from a journey all beaten up and is currently on her deathbed. Thinking she'll die soon, the young lady told her father to send his men to Kiev after philosopher Khoma Brutus, who has to read prayers for her sinful soul for three nights in a row. Sensing this is not going to end well, Khoma attempts to talk himself out of it, but the rector threatens the philosopher with a severe punishment since he's been bribed.

The cossacks transport Khoma to a small village right before the pannochka (how the witch is always referred to, meaning 'young lady/mistress' in Ukrainian) dies. The old lieutenant orders Khoma to read prayers over his daughter's corpse, just as she wished upon deathbed. If he does so, the cossack promises to have his efforts handsomely rewarded. The catch is that Khoma must perform praying rituals at night, while being locked inside a creepy old church with the body, which (surprise) is the sorceress that he inadvertently killed. Now Khoma must gather all of his courage, as the young witch is not going quietly, and hell-bent on avenging her death. There are three nights awaiting the philosopher, at the end of which he may meet something far more terrible and dangerous than the evil pannochka: a whole army of evil spirits from the Underworld along with their leader- Viy.

Gogol's novella had (and still has) enormous influence in Russia, but this influence is hardly limited to her borders. The 1909 movie adaptation is a Lost Film, considered by historians to be the first Russian horror movie. The most famous (and faithful) cinematic adaptation was made in the USSR in 1967, featuring Leonid Kuravlyov as Khoma and Natalia Varley as the witch; it is now considered to be the greatest Soviet horror film (not that there were many). Other adaptations include a 1990 Serbian film called "Sveto mesto", a 1996 Ukrainian cartoon and a 2006 Russian Setting Update adaptation called "The Witch". In 2014 came another Russian "Viy" flick (internationally known as Forbidden Kingdom, and in the UK as Forbidden Kingdom), which served as a direct sequel to Gogol's original story and uses a Maybe Magic, Maybe Mundane approach towards its events. Mario Bava's 1960 film Black Sunday is said to be an adaptation of "Viy", though it's a very loose description. Some also argue that the plot of From Dusk Till Dawn bears more than a passing resemblance to "Viy". Viy makes an appearance in the mobile game Fate/Grand Order as a shadowy being at the beck and call of Grand Duchess Anastasia, who is something of a Composite Character with this story's witch, as Viy took revenge on the soldiers who killed Anastasia through the same methods it used to torment Khoma.

The novella provides examples of: