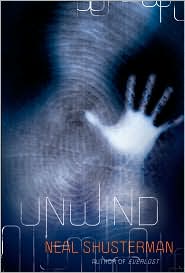 A YA novel by Neal Shusterman. A long time before the book started, there was a war called the Heartland War between the pro-life and pro-choice sides. The government compromised by making abortion illegal as a baby, but from the ages of 13-18, children can be "unwound", which is when all their body parts are donated to other people. Connor, a troublemaker from Akron, Ohio, is going to be unwound. He decides to run away and hitches a ride with a truck driver. His parents find him and he escapes the "juvie cops", or police who specialize in catching runaway "unwinds," and runs into Risa and Lev. Risa has been consigned to unwinding because, at a State Home, or StaHo, her piano skills were not good enough and they needed to cut costs. Lev is a "tithe" -the 10th child of a rich, religious family who gives 10 percent of everything. Brought together by chance, and kept together by desperation, these three unlikely companions make a harrowing cross-country journey, knowing their lives hang in the balance. If they can survive until their eighteenth birthday, they can't be harmed — but when every piece of them, from their hands to their hearts, are wanted by a world gone mad, eighteen seems far, far away.

An novella, called UnStrung has also been released as an e-book. It tells the story about how Lev became a clapper.

Constantin Films has the rights to the movie, though it's been trapped in Development Hell for quite some time.