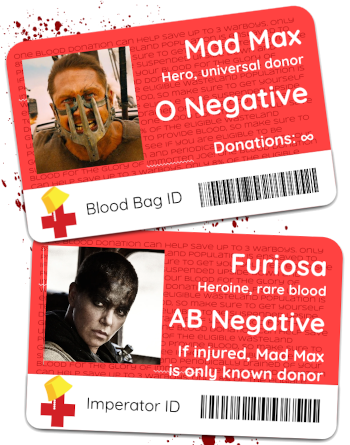 Although most of the real world gets by quite peacefully with the more common blood types, in the world of entertainment only the rarest will do; if a character's blood type is mentioned, you can bet that it's going to be rare and special. Blood in fiction really comes in only two types: universal donor (O-, rare) and special needs (common), so that blood banks are overtaxed whenever the plot requires. Because AB- is the rarest blood type (found in less than 1% of the population), cases of the latter will often give the character an AB- blood type.

In reality, while doctors do prefer to match blood type exactly when possible (especially when doing organ transplants, to reduce the risk of rejection), in a life-or-death situation — which is the only situation this trope would find worthwhile — any compatible blood type will do. note In a sufficiently critical situation, such as when a patient is literally going through dozens or hundreds of units, even incompatible blood can be used, with compatible units reserved for the first few and last few transfusions; all the problems that would normally result from transfusing a type O patient with type A blood are negated when the patient's own blood is long gone and the type A blood is hemorrhaged out almost immediately. This is also how James Harrison became "The Man with the Golden Arms". When it comes to compatible matches, AB- blood is actually not that hard to match, because an AB- patient can receive transfusions of any Rh negative blood type (A-, B-, AB-, or O-), which are found in about 15% of the population. The most difficult type to match is actually O-, since the same factors that make O- the universal donor also mean that O- patients are only compatible with O- blood,note and O- being the universal donor can also reduce the availability of this type, given that it's the go-to for emergency situations where blood type is unknown and is also a fallback for all blood types when other compatible matches run out while every other blood type is compatible with at least itself and O-; however, O- blood is also not as rare as AB-, appearing in just under 7% of the population, so the chances of having some available or finding a donor are better.

The situation of needing rare blood types is an actual problem that occasionally happens in medicine, but it's almost always related to blood types and factors that fall completely outside the normal blood type groupings (see the Real Life folder for examples).

A subtrope of Blood Transfusion Plot. Not to be confused with Did Not Do the Bloody Research or Personality Blood Types.