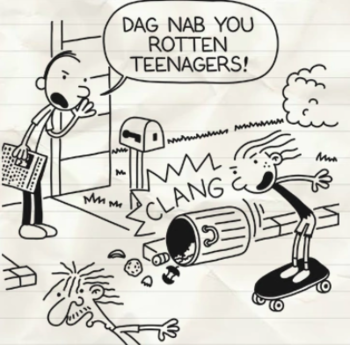 Whether it's because they see teens as delinquents up to no good, monsters, sex fiends, or just plain bullies, some characters just have it out for teenagers. Adults, especially the elderly, parents, and middle/high school teachers, might despise teenagers for rebelling against their authority and being sassy little runts, while children might hold a grudge against them for being bullies and having more freedom, which they're very much jealous of. Even teenagers themselves are susceptible to self-loathing due to negative experiences with their age group. It should be noted that adults who don't hate both children and teenagers may actually favor the former more for being more innocent, and parents who fall to this trope may feel nostalgia over when their rebellious teen Used to Be a Sweet Kid. Conversely, kids who don't also hate adults may actually be on the latter's side for attempting to discourage teens' misbehavior (albeit unsuccessfully of course).

Much of the fuel for this trope comes with the stigma centered around teenagers. Recklessness, cringe, and immaturity are commonly associated with this age group, even though that isn't always the case.

This trope generally has the Teen Haters in question be portrayed sympathetically if the work portrays teenagers as monsters or, in a less villainous case, simply cruel kids. However, the work may take the opposite route by having the teens be sympathetic Troubled Teens whose destructive behavior results from a Dark and Troubled Past, problems at home, or just frustration over being expected to act like adults yet being treated like children, thus giving them a Freudian Excuse. This may make the Teen Haters in question the antagonists. In retaliation, the teenagers may form a Teenage Wasteland.

Compare Child Hater, the younger version of this trope, which may overlap if the work takes place in Junior High and has the early teens be more developmentally in line with preteens. In contrast, the Child Hater trope portrays its victims more sympathetically by using the belief that Children Are Innocent, though they can be portrayed just as equally unsympathetic as victims of this trope if the work insists that Kids Are Cruel.

It must be said that there are people in real life who detest teenagers. However, given the controversy of this subject, No Real Life Examples, Please!.