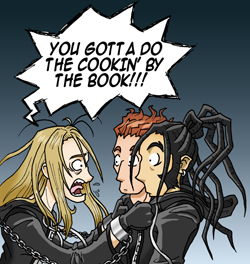 Let's just say it's not been Vexen's day.
Once upon a time, in The World That Never Was, at an indeterminate time of day, Xaldin, Vexen, and Lexaeus encountered a monster that was destroying the Organization by taking their... you know. Immune thanks to them being "ugly" (a teenage fanbrat is in control and clearly doesn't realize that Lexaeus is MANLY), these three nobodies embark on a world-hopping journey to save their comrades, battling the gutless and countless pop culture references, in an attempt to restore logic, sanity and good humor to the fanfiction universe, all while protecting their groins from assault by the Semes. Who are kind of like The Heartless, but instead of hearts, are disembodied, um... you know.
Advertisement:

is a Kingdom Hearts fanfiction written by Gexegee of Organization VI

. As a Meta Fic, it parodies just about every aspect of bad fanfiction. Xaldin, Vexen, and Lexaeus race through alternate universes, and encounter a wide variety of Fanfic Tropes, including Slash Fics, High School AUs, Self Insert Fics, Song Fics, Cross Overs, Crack Fics, Wangst, and Canon Defilement, while keeping the plot of Gutless changing the remaining members of Organization XIII into shadows of themselves. Along the way, it viciously lampoons several other franchises, lovingly mocking everything under the sun in a brilliant, hilarious (and sometimes long-winded) romp through fanfiction itself.

A 4th anniversary Dramatic Reading of the fanfic has been started

Those Lacking Spines contains examples of: