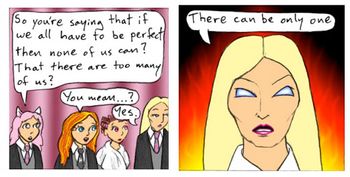 What should happen when one of these occurs.note And then the last one commits seppuku. Yay!
Meji: …so… um… you're Jon's long lost, estranged sister, who's been turned into an emotionless magic Ninja assassin by some secret order of monks hidden in the mountains? That's like, really, kinda freaking stupid if you don't mind me saying. And I thought your brother's whole "hitman with a troubled past and a heart of gold" bit was bad.
Ellis: Yeah, and this is coming from a magic-using, half elven heiress with unusual hair and eye colors, and a talking animal companion. So that's really saying something there.
— Errant Story
Advertisement:

Mary Sue is legion, for she is many. She has many forms, each more terrible than the one before. And she breeds.

Some authors, through either myopia, self-absorption, or the fact that they're writing the story with or for a group of their friends, don't stop at just one. They pile the Sue on. "Let's see, Purity Sue for the heroine, of course. Plus a Relationship Sue for her love interest. Villain Sue pitted against her, because my villain should be cool, too. Wait, people might think this is stereotypical, let's put her friend Anti-Sue in there to show everyone I'm a serious author. And hey, while I'm at it, why don't I make the Ensemble Darkhorses the heroine's best friends? They are so underrated… and they can all have adventures in my Mary Suetopia!"

And then there are authors who don't want anyone stealing the limelight from the surrogate, so they pile every single Sue trait onto one character, creating a sort of… Hive Sue. On the other hand, authors that are slightly more fandom-savvy may forgo making original Sues and turn all their favorite canon characters into Possession Sues instead in order to fall under the Mary-Sue Hunter radar.

Parody Sue is usually this done deliberately, although it can become hard to tell it was supposed to be a joke. Parodies of multiple types of Sue tend to turn into a bloodbath (see page picture), as there's usually only room for one.

And the above example raises a kind of interesting question: When everyone is a Mary Sue, would they cancel each other out? Or would the universe implode? The idea that they cancel each other out and keep the setting in conflict is one of the major rationales behind this trope. After all, fantasy settings, polytheistic settings involving any Gods, and Comic Books can get away with nigh-omnipotent characters fighting each other and creating conflict without the readers calling out the characters as Canon Sues.