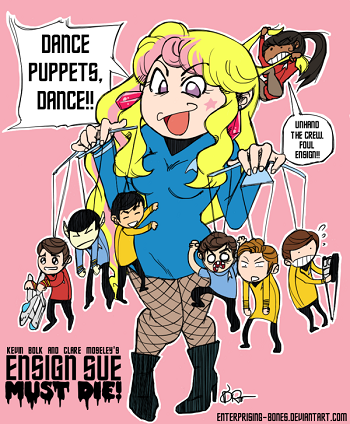 Buffy: I was just kind of wondering if anyone else thought that Jonathan is... kind of... too perfect?
Xander: No, he's not! He's just perfect enough! He crushed the bones of The Master, he blew up a big snake made out of mayor, and he coached the U.S. Women's Soccer team to a stunning World Cup victory!
— Buffy the Vampire Slayer, "Superstar"
Advertisement:

The Black Hole Sue: Her gravity is so great, she draws all the attention and causes other characters (and, often, reality itself) to bend and contort in order to accommodate her. Characters don't act naturally around her. They instead serve as plot enablers for her, with dialogue that only acts as set-ups for her response. She dominates every scene she is in, with most scenes without her serving only to give the characters a chance to "talk freely" about her. Most people don't oppose her and anybody who does will either realize their fault in doing so or just prove easy to overcome.

The very laws of the universe bend to accommodate her. If there's only one in a million chance she could succeed at something, she'll accomplish it with flying colors. If the logical outcome of the story would end in her failure, a Deus ex Machina will ensure her victory. Nothing is too implausible for her to accomplish, whether it be going from Rags to Royalty, killing an Eldritch Abomination, or bringing about world peace. Even the most disdainful and unmoving characters will be Easily Impressed with her. Is there some great deity of unimaginable power in the setting? Expect her to have them astounded by her abilities. If she is so inclined, she may do all that before sitting down to a breakfast consisting of the original story.

This is fairly blatant author favoritism in effect, with the author using his or her effective position as God of the story to carry the character through by her hands. In the rare cases when Sue fails, it will usually be a temporary setback that will either prove advantageous in the end or else just serve to hammer in the point of how special the character is. These failures can often involve just as much Deus ex Machina as her successes, setting up events in which she logically shouldn't fail.

Because of this, the character just ends up rather boring to witness. Heroes might be naturally predisposed to winning and some villains might never seem to be taken care of, but Black Hole Sue does away with anything resembling logic to prop up the characters. It stops being a story and just becomes more like a fictionalized resume of improbably fantastic deeds.

Compare Spotlight-Stealing Squad, where the disproportionate focus is on certain supporting or ensemble characters instead of the protagonist.