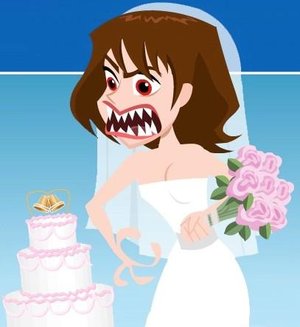 The icing is supposed to be LAVENDER!
"I've been through too much planning this wedding, and it is going to happen. It is going to be our perfect, perfect day if I have to kill every one of our guests and half this town to do it."
— Anya, Buffy the Vampire Slayer
Advertisement:

Bridezilla is that raging reptilian creature a bride morphs into when she comes to believe that the wedding is Her Big Day, where she is the center of attention, her every whim must be indulged, and no one had better protest, complain, or tell her she's being unreasonable.

This is a relatively recent trope, dating not much further back than The '70s and only becoming well-known in The '90s. Before then, only the wealthy had huge elaborate weddings, which were social occasions planned and paid for by the bride's parents. Everyone else got hitched at the local church or courthouse or even at home, with the main splurge (if any) being a honeymoon tour to visit relatives afterward.

Upward mobility after World War II created the wedding industry as we know it today, with bridal magazines advertising their wares to middle- and working-class couples who could now afford at least some of the trappings of a big fancy wedding. But unlike upper-class families, for whom large-scale event planning was old hat (or who could afford to hire a wedding coordinator to handle the details), such couples were often unprepared for the sheer amount of work (and money) that goes into a big wedding. The dream of the "perfect day" meeting the rock of cold reality can stress anyone out, and so the legend of the fire-breathing, rampaging bride was born.

Uses of this trope tend to split between 'normally-decent person showing her ugly side due to stress' and 'egotistical and selfish bitch reveling in her moment of being the center of attention.' The former type of Bridezilla can recover once the wedding is over and the marriage begins; the second will only get worse. Also, any wedding participant can merit the '-zilla' title if they hijack the day to gratify their own egos. The bride is simply assumed to be the most likely candidate to get Scaled Up because she is the centerpiece of the ceremony, which she may have been dreaming of long before she ever met the groom.

Related to The Prima Donna, Drunk with Power, and What You Are in the Dark. Often occurs because It's All About Me.

(No relation to Godzilla, Not Zilla, or any other Kaiju tropes. We hope.)

Twilight is suspicious when the normally kind and loving Princess Cadance is so demanding to everything when it comes to wedding planning.

Twilight is suspicious when the normally kind and loving Princess Cadance is so demanding to everything when it comes to wedding planning.