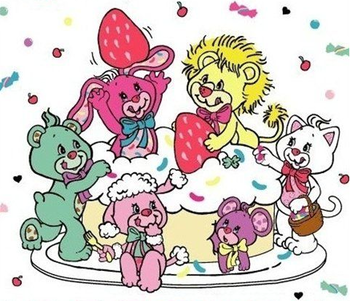 So yummy to love!
Yum Yums play the whole day through, making fun for me and you!
They're so sweet and fuzzy too! We all love the Yum Yums!
Advertisement:

The Yum Yums were a line of Care Bears-esque toys in the late 1980s and early 1990s. They were created by Kenner and Hallmark, consisting of multicolored animals that smelled like candy. To go along with the toys and general merchandise, Hanna-Barbera released a TV special in 1990, The Yum Yums: The Day Things Went Sour. While the franchise faded in the US, the toys and cartoon became huge in Japan and remain fairly popular.

The special is about the Yum Yums being set for the big opening of the Yum Yum Theme Park, but trouble arises when the mean and nasty Sourpusses, who hate all fun, steal their Magic Toolbox and ruin all of the rides and attractions. It's up to Peppymint Kitty, Jumpin' Jellybean Bunny, Chuckle Chip Bear, and Lucky Lemon Lion to take a dangerous journey to Sour City in order to get the toolbox back in time for the grand opening!

These toys and special contain examples of: