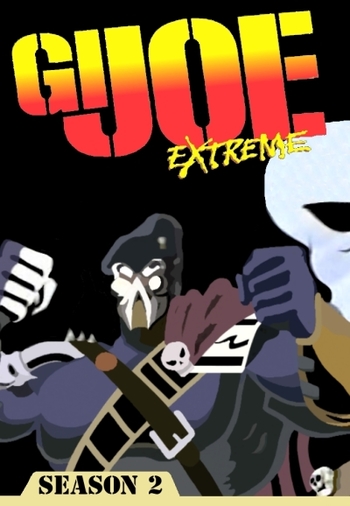 News Monopoly Montage: "Surrounded on all sides... the odds of survival are a million to one."
GI Joe Extreme!
News Monopoly Montage: "And with the collapse of the former superpower..." "...Several powerful factions now vie for control." "The threat is real." "An evil organization calling itself SKAR..." "...known only as SKAR..." "Their goal..." "...nothing short of total world domination." "Led by this man..." "...known only as Iron Klaw..."
Advertisement:
Iron Klaw: "We will be victorious!"
Lt. Stone: "Not on my watch!"
News Monopoly Montage: "The odds are a million to one..."
Lt. Stone: "And that's the way WE LIKE IT!"

G.I. Joe Extreme is one of the many animated interpretations of the G.I. Joe franchise subsequent to its original and best known incarnation. Following the short-lived Sgt. Savage and his Screaming Eagles, Extreme was a drastic reinvention of the brand in both style and design, pitting a brand new G.I. Joe team against a new enemy, the Soldiers for Kaos, Anarchy, and Ruin (SKAR). The line, supported by both a 26-episode cartoon series (1995-1997) and a short-lived comic published by Dark Horse, embraced the style of The Dark Age of Comic Books, making heavy use of hard shadows and hyper-muscular characters.

Set in the far future of 2006, the terrorist organisation SKAR, led by the masked Iron Klaw, is emerging and threatening the Inter-Alliance. In response, a new G.I. Joe team is formed to counter the threat. However, they don't know that Iron Klaw disguises himself as Count Von Rani, the leader of a small European country that is part of the Inter-Alliance. Both the comics and the cartoons use the same basic setup but go in a different direction.

The Extreme toyline was a massive failure, leading Hasbro to quietly kill the show and comic, and let the G.I. Joe franchise rest for a few years before returning to the A Real American Hero brand. Despite its impopularity, Extreme has been occasionally referenced in future G.I. Joe and Transformers materials. Some of the codenames introduced in Extreme were reused in future lines (starting with Sigma 6) and Iron Klaw and Steel Raven were integrated into the A Real American Hero universe as Collector's Club figures, the former in 2013 and the later in 2016. Additionally, some of the franchises' crossovers with Transformers have made reference to some of the concepts from both this and Sgt. Savage, including certain characters now referenced in Revolutionaries, a part of the new Hasbro Comic Universe.

The toyline provides examples of