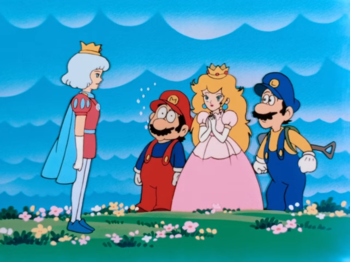 Wait! Who's that prince?! note Prince Haru from The Great Mission to Save Princess Peach!
Rokk: Kal-El, I have to tell you - we've heard of Lois Lane, Lana Lang, even Jimmy Olsen, but we've never heard a thing about any "Chloe Sullivan".
Clark Kent: ...Then you don't know me as well as you think.
— Smallville
Advertisement:

When an established existing medium ventures into the Expanded Universe, writers will often rely heavily on familiar characters and past storylines from the official canon to ensure that fans of the original material are happy. Unlike the original canon, however, an "expanded universe" adaptation also gives the writers freedom to introduce new, "never before seen" characters, as the production staff enjoys their newfound liberation from whatever codes and limitations ruled the original work.

These new characters will often be added to fill a particular need in the new story, and add some degree of novelty to attract readers/watchers. Frequently, they'll also fill some gap in the current cast, such as adding a female character to an all-male cast (or adding a second female where there was only one before), or adding some other element of diversity, be it racial, geographic, sexual, or simply personality. This can spark new conflicts and adventures that wouldn't otherwise occur under the limitations of the "conventional" cast and series format — one of the main points of "expanded universe" fiction to begin with.

Depending on how well the character fits into the adaptation or how much the fans like the character, Canon Foreigners can either be much beloved or much hated, and if popular enough, may be Ret Canoned into the official canon where they are known as a Canon Immigrant.

Filler Villain is a Sub-Trope of this.

Compare Original Generation characters, who are Canon Foreigners to several canons at once in a Crossover plot, and Canon Character All Along, when a supposedly new character is later revealed to be a well-established character within a canon. Contrast Adapted Out, where a character in the source material is omitted in the adaptation.

First appearance of Gopher, a character not originated from Milne's stories. For an added bonus, he's not in the book.

First appearance of Gopher, a character not originated from Milne's stories. For an added bonus, he's not in the book.