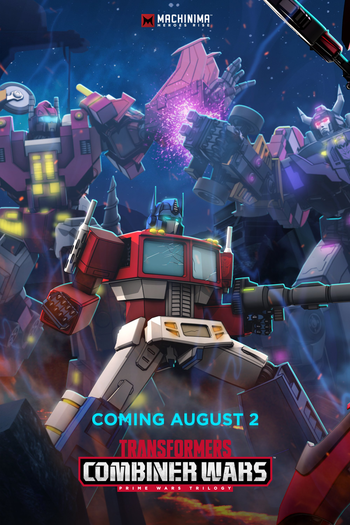 With the release of The Transformers: Combiner Wars in 2015, Hasbro announced a joint venture with Machinima to produce an animated web miniseries based on the comic for the following year.

With Megatron's defeat, the war has ended. Cybertron and sister planet Caminus have joined together to face a new future and a new peace. Rodimus, Starscream, and Caminus's Mistress of Flame have formed a council to help guide their people though this new world; but a new threat has arisen. The Combiners, beings formed from multiple Transformers, have arisen and they threaten the peace and stability of the new era. With the Council paralyzed with indecision and disaster mounting, the young City-Speaker Windblade takes matters into her own hands to stop these destructive creatures.

Leading up to the series, 4 short videos were released, detailing the significant characters and how the plot came about. Each is animated in the vein of a motion comic. They give focus to Optimus

Combiner Wars was launched as part of Hasbro's Prime Wars Trilogy as a loose adaptation of the comic series of the same name. The series is created by Machinima and animated by Tatsunoko Production, and released on August 2 on the go90 platform and YouTube. A sequel, The Transformers: Titans Return, premiered in November 2017, with another sequel, The Transformers: Power of the Primes, premiering in 2018.