Animal Is the New Man 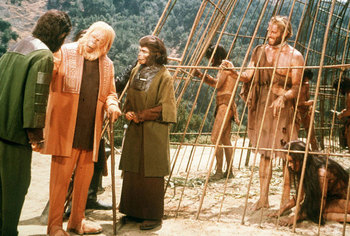 Taylor: Man preceded you here. You owe him your science, your language, whatever knowledge you have.
Dr. Zaius: Then answer me this — if man was superior, why didn't he survive?
— Planet of the Apes
Advertisement:

In the distant future (or at least 20 Minutes into the Future), humanity has declined, and animals (whether all of them, or a few certain kinds) become the new dominant species.

Here, the humans might be extinct and animals now roam the world freely; there might be scenes of them living on manmade living places if any of them existed at all. Alternatively, there might be only a few humans left, either scattered away or confined to a single location. They may have regressed (whether just culturally or outright becoming animals themselves) so that they can't form a modern-like society anymore; they're no longer the dominant species.

Sometimes, the animals might have become Funny Animals or Beast Men (which one it is depends on whether the work leans more to the comedic side and uses this trope to justify a World of Funny Animals setting or whether it leans more to the drama side and uses this trope to speculate a hypothetical future for social commentary). There may or may not be an in-universe "evolution" happening to them; here they have quite literally become the new "man". Furthering in this direction, the humanoid animals may even see the humans (if there are any) as "animals", either as a Human Pet, human cattle, etc.

Plots involving this setting might be about how animals live now that they're the dominant species, or they may focus on the few humans who tried to survive in the "new world" full of animals.

A Sub-Trope of Humanity's Wake and Humans Are Not the Dominant Species.

Might be the justification for a World of Funny Animals. Cockroaches Will Rule the Earth is a subtrope.

See also Uplifted Animal, which is how the animals become smarter.