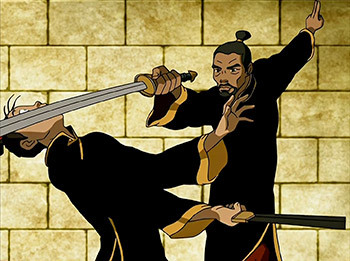 A common maneuver in a Sword Fight: one character will dodge a horizontal sword cut aimed at their head by bending over backward as the opponent's blade passes over their body. This may involve bending both knees in order to drop the body lower while using the arms for balance.

Often filmed from above and in Slow Motion to boot, a la Bullet Time. Sometimes the shot will also employ an extreme zoom to show the sword cutting through a loose strand of hair. Ooh, that Could Have Been Messy.

In real life this move is less than ideal. You could defend against such a cut more quickly and safely by parrying with your sword, which would also let you immediately counterattack. On the other hand, if you were so good that you could definitely predict the height and angle of his cut, you could dive really low on one knee—either forwards or to the side instead of backwards—and nail him with your sword while his cut passed over you. Doing the limbo implies that his cut caught you flat-footed and you didn’t have your sword ready to defend: in other words, you already goofed and this is your desperate reflex. Bending backwards is problematic because it only works if his cut is quite high, and it’s obvious enough that he could see what you’re doing and correct his aim unless you waited till the last possible moment and cut it really close. Then, even if it works, your recovery time is too long and he’ll probably hit you with a follow-up strike before you’re ready to defend again. That it works in movies is thanks to Flynning and Rule of Cool. On the other hand, if you avoid a high attack with a retreating step you could add to your margin of safety by leaning slightly backwards as you step.

Not at all about swords that disappear into nowhere.