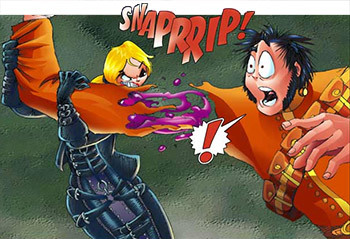 Von Pinn demonstrates a novel disarming technique.
"There's no sense of weight to any of the gore. When a body gets mangled or hacked apart there's no sense of effort or that the flesh is resisting, or even that it hurts much. The necromorphs seem to hack off your knees by brushing past you in a narrow corridor. And do you know how hard it would be to sever a leg by stamping on it? You'd need to wear an ice skate! And even then the bone's gonna take a few whacks!"
— Zero Punctuation, reviewing Dead Space 2
Advertisement:

All things considered, the human body is a pretty tough little piece of biological machinery. It's made of complex organs, protected and supported by a strong skeletal structure (four times stronger than concrete), boasts tendons and muscles capable of exerting dynamic strength upon objects it interacts with and has the ability to heal and regenerate most kinds of damage over time. Humans, especially athletic ones, can take a lot more punishment than most people think. Don't Try This at Home, but it is a fact that human beings can walk away from catastrophic accidents and savage attacks with little sign of external damage and occasionally survive wounds that should have been fatal by conventional wisdom.

The polar opposite of Made of Iron, this trope manifests when the human body is represented as being much flimsier and more easily dismembered than it really is, or when its internal structures are depicted as a mass of bloody, spongy goo, with no sign of supporting bones or recognizable organs. Like Made of Iron, it is a poster trope for a class on the Super Weight scale, being -1.

In Real Life, it requires considerable skill and force to, for example, cleanly sever a human limb with a bladed weapon. It does happen, and there are historically known incidents including at least one case where both legs were severed by a single blow with a large sword. In fiction, however, heads and limbs may be instantly, cleanly severed on contact with anything resembling a bladed weapon or sharp-edged object. A bleeding wound will create a spray of so much High-Pressure Blood the victim ends up Overdrawn at the Blood Bank. Accidental contact with a pointed object leads to out-the-other-side impalement. Pulling on someone's arm with any amount of serious force will yank the limb from the socket. Bones snap like twigs, flesh rips apart like wet paper, contact with fire burns a body to a charred skeleton within moments and at worst, the entire body is simply splattered by whatever force hits it like an overripe tomato.

The implied force just does not jibe with the visible effect.

Vampires and zombies in any media are great examples of this. (Some) zombies at least have the excuse of being, well, rotten, but the ease with which vampires can be staked through the heart and pristinely decapitated makes one wonder if they even have bones. Also very common with characters who have a Healing Factor so they can be shown recovering from all manner of brutal injuries on a regular basis.

On the other hand, sometimes the physical forces at work are just too much for the human body to endure, making this one, when handled correctly, a particularly gruesome Truth in Television.

Oddly enough, this always seems to be played deadly straight with Mecha-Mooks who, if anything, should avert this trope even further. It is, however, almost always averted with their bigger, deadlier counterparts: Mechanical Monsters.

Compare Bloodier and Gorier, which almost always involves this, and Made of Bologna, an Animation Trope in which a body's lack of bones and internal organs is used to avoid showing gore. Not to be confused with Claymation, a form of Stop Motion animation that commonly uses Plasticine models over a wire skeleton. Contrast Made of Iron.