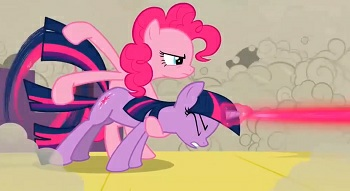 Say hello to My Little Pony!
"Just so we're clear Maka; this guy's turning himself into a weapon. He's the same as me that way. 'course I look a lot cooler in my human form than he does."
— "Soul Eater" Evans, Soul Eater
Advertisement:

This is an ally who can serve as a weapon. Not in the sense of an Attack Animal or Mon but in that their ally picks them up and uses them to strike down their foes.

Sometimes more exotic solutions present themselves with characters who are capable of Voluntary Shapeshifting into a weapon (typically a powerful one, otherwise they would just be cutting their forces in half). Weapons which can manifest some sort of avatar or otherwise interact like any other character also count. A related trope is the Empathic Weapon, which seems to have some vague form of intelligence or link with its wielder but not enough to count as a person (although particularly powerful examples might overlap with this trope under special circumstances).

An improvised version of this (i.e. picking up an ally and using them to strike an enemy) could overlap with Grievous Harm with a Body or Fastball Special if a habit is made of it (examples of these go on the relevant pages). If they're used as ammunition see Catapult to Glory. See also Drone Deployer. A subtrope of Living Weapon, and sister trope to Combining Mecha. Not to be confused with Human Weapon.