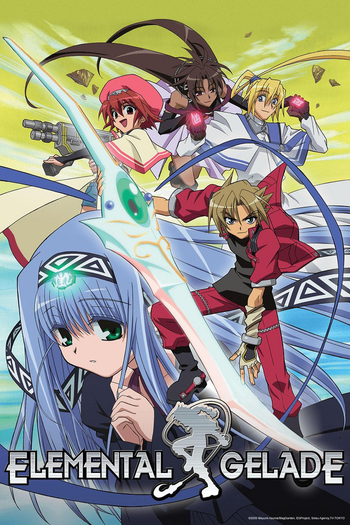 Elemental Gelade (called Erementar Gerad by some, including the US copyright holder) is a manga by Mayumi Azuma which ran in Monthly Comic Blade from 2002 to 2009. An anime adaptation aired in Japan in 2005.

Coud van Giruet is a brash and adventurous young rogue who dreams of becoming the greatest Sky Pirate in history. One day, he stumbles upon a strange girl named Ren who turns out to be an Edel Raid: a special type of human able to form a contract with a "Pledger" and become a powerful weapon. Together, they embark on a quest to find the legendary "Edel Garden", which is supposedly the birthplace of all Edel Raids.

Joining them on their journey are members of Arc Aile, a military organisation seeking to put every Edel Raid under their protection. But a common enemy soon emerges in "Chaos Choir", a group of religious extremists that worships the power of Edel Raids and wishes to capture Ren for their own purposes.

A sequel called Flag of the Blue Sky was also released, taking place two years after the original story but with a new set of characters. For centuries, the Edel Raids of the Velsown family have served the regent of the Fuajarl kingdom, also known as the Kingdom of the Sun. The latest Edel Raid to inherit this position is Jelio "Jean" Velsown, a determined and stoic young knight. When a hostile force invades the kingdom to capture Jean, she is ordered to flee with the young crown princess, Princess Acheaburca Fuajarl XIV. With the fall of the kingdom and the murder of the king, Jean and Acheaburca form a pledge of vengeance and plan to restore Fuajarl to its rightful glory.