It's the Journey That Counts 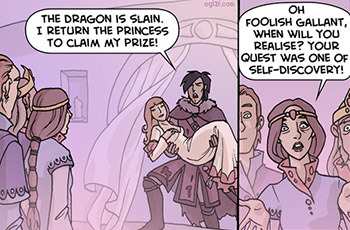 "We are not asking him where the treasure is hidden! We're not even asking him whether there is any treasure or not! I'm not sure, but...everybody set out to sea, risking their lives to search for it!! If you ask this old man anything about it here and now...then I'll quit being a pirate! I don't want to go on a boring adventure like that!!"
— Monkey D. Luffy, One Piece
Advertisement:

The heroes have traveled far and wide, braved many obstacles and even challenged the forces of darkness to find the legendary lost treasure. Maybe it's a fortune in gold and jewels, left behind by a long-dead king, or perhaps it's a book of ancient wisdom, or a magic mirror that lets the bearer see the future; whatever the case, the protagonists (and any number of rivals) have good cause to believe what they're after is very valuable and/or powerful, the sort of thing that could change their lives - perhaps even change the world - and definitely not something that should fall into the wrong hands.

So they find the ancient tomb. They open the sarcophagus. And what do they find inside?

Nothing. No pile of treasure or legendary artifact, just an old coin and a note telling them that they've already found the greatest treasure of all.

And it's true. The legends may have been greatly exaggerated, but all of our heroes have become better people as a result of their experiences. What they found at the end of their journey may only have sentimental value, but its message is clear: these are lessons they would only have learned by setting out in search of it. As the old saying goes: "it's the journey, not the destination".

With this trope, the object of the seeker's quest turns out to be materially worthless, but also constitutes a revelation that the seeker has grown or developed in some meaningful way during the course of their journey. Of course, if the protagonist's development is nullified or ignored, then you have a "Shaggy Dog" Story on your hands. Wanting Is Better Than Having is another aesop that is often invoked with this one.

Compare All That Glitters, where the twist is merely that the treasure is worthless, not that the characters have benefited from the search for it; Bluebird of Happiness, where the bird is often found back home; Going to See the Elephant, when arriving at the destination is simply not as important to the plot as the journey there; Magic Feather, where the protagonist discovers he's always had the abilities he ascribed to the MacGuffin; and The Homeward Journey. Contrast Boring Return Journey.

Note that, by this trope's very nature, spoilers follow!