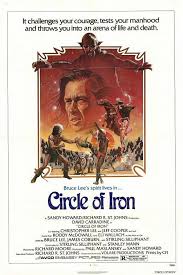 A fantasy martial arts film written by Bruce Lee, with James Coburn and Stirling Sillphant; and intended to be an exploration of Eastern philosophy and martial arts. Originally titled The Silent Flute, Lee died before he could film it. Silliphant re-wrote the story, and filmed with David Carradine playing the lead (the second time Carradine would play a role originally intended for Lee).

The main character is Cord (played by Jeff Cooper, better known for his roles on soap operas The Young and the Restless, and Dallas), a martial arts practitioner who rejects the restrictions of a formal school, but prefers to develop his own martial arts style; mirroring Bruce Lee's own work on Jeet Kune Do

. At the opening of the film, Cord is competing in a martial arts tournament to earn the right to set off on a quest for the legendary Book of Enlightenment, a book that contains all the wisdom of the world, and is guarded by a master named Zetan. Though Cord wins the contest, he does so by violating the highly restrictive rules, and his opponent, Morthond, is granted the quest. (Though not made clear, it is apparent that information on how to find Zetan and the Book of Enlightenment is only supplied to the contest winner). Cord tags along with Morthond, insistent on finding Zetan and the book.

Along the way, he encounters a number of "trials", physical conflicts which serve as metaphors for Cord's spiritual journey to enlightenment, as well as furthering his education in the martial arts. Not all of Cord's trials involved combat; in fact, at least half of them require resisting various temptations, both hedonistic and ascetic. Passing each of the trials earns Cord further information on how to find Zetan and the Book. Morthond fails the first trial and dies, leaving Cord alone to pursue the quest.

Along his travels, Cord encounters a blind beggar played by Carradine, who plays a flute that only Cord is able to hear; and who displays a level of skill far beyond Cord's despite his blindness. Reluctantly the beggar becomes Cord's teacher and guide, helping him with both his physical and spiritual development.

Ultimately, Cord reaches Zetan and is permitted to view the Book of Enlightenment; only to find not a book of wisdom, but reflections of himself.

All of the combat-based trials involve defeating a specific person, each one of which is also played by Carradine.

The philosophy behind the movie is based heavily on the Chinese Chan Buddhism, which is better known in the West in its Japanese form, Zen Buddhism.