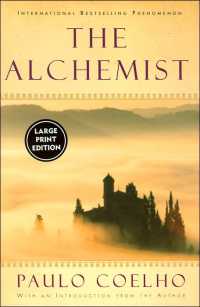 ”To realize one’s destiny is a person’s only obligation.”
Advertisement:

Shepherd Santiago lives a peaceful life in the fields of Andalusia, tending his flocks and crushing on a local wool merchant's daughter, untroubled save for a strange recurring dream. When a fortune-teller interprets his dream as a prophecy telling him to find treasure hidden in the pyramids Santiago, (with encouragement from a strange old man who calls himself the King of Salem) follows the dream's message, seeking out his "personal legend." Aided by Urim and Thummim, a pair of fortune-telling stones gifted to him by the King, Santiago travels on foot to Egypt, meeting diverse range of people along the way: a crystal merchant dreaming of making Hajjnote The traditional pilgrimage to Mecca

every Muslim is required to make at least once in their lifetime, a desert-dwelling beauty named Fatima, an Englishman seeking the philosopher's stone, and the titular Alchemist. From each encounter and event Santiago gains a new understanding of himself and what he seeks, and ultimately leads his quest to the most unexpected of conclusions.

Written in the span of two weeks, The Alchemist was an unexpected bestseller, remaining to this day one of Coelho's most popular works. Surrounding the main plot is a mythology combining the mystical traditions of the Abrahamic religions with Hermetic philosophy and aspects of Alchemy, a surprisingly sensitive (one might say affectionate) portrayal of Bedouin culture through the eyes of a Spanish youth, and an overarching message about following your dreams to even the most unexpected of places. These factors have contributed to the novel's success, giving it a broad appeal across cultures and age groups.

The Alchemist provides examples of: