Video Game / Life Is Strange: Before the Storm 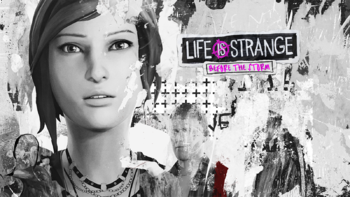 She was my angel.
Chloe Price: So if I came to you tomorrow and told you to pack your bags...
Rachel Amber: I'm serious. Let's do it, Chloe. Let's leave this place forever.
Chloe Price: Okay.
Advertisement:

Life is Strange: Before the Storm is a 2017 episodic adventure game that acts as a prequel to the first Life Is Strange. As DONTNOD Entertainment was busy with the Life Is Strange sequel and Vampyr (2018) at the time, Deck Nine was the developer this time around, though Square Enix remained the publisher. This game was also affected by the 2016 SAG-AFTRA strike against video game publishers; hence, none of the first game's characters who make an appearance in this game could be played by their original voice actors, although Ashly Burch did work as a writing consultant. She and Hannah Telle would ultimately reprise their roles in the bonus episode "Farewell", made after the strike ended.

Still grieving from the death of her father in a tragic car accident over a year earlier, sixteen-year-old Chloe Price (Rhianna DeVries) is trying to deal with the loss while everyone around her has seemed to move on. Compounding this is the loss of her best friend, Max Caulfield, who moved away shortly after and hasn't kept in touch.

In the course of Chloe's rebellious teenage grief, she forms an unlikely relationship with the most popular girl in school, Rachel Amber (Kylie Brown). Soon after, Rachel discovers a family secret that shakes her to the core. As Rachel and Chloe grow closer and try to figure out what has blossomed between them, their newfound relationship is put to the test as demons both within and without threaten them.

Taking place three years before the events of Life is Strange, Before the Storm gives us insight into the hinted-but-never-elaborated-on relationship between Chloe and Rachel, who was never seen but whose presence was strongly felt. As Max is still in Seattle, the player is instead allowed inside the head of Chloe Price. The point-of-view switch provides a very different tone — whereas Max was a shy, optimistic photography student rediscovering her old home, Chloe is a cynical, scathing girl who sees Arcadia Bay as a hellhole full of painful memories and terrible people, and she can't wait to leave.

As Chloe has no time travel powers that defined the first game's gameplay, she instead uses a new system called Backtalk — a series of back-and-forth dialogues that heavily utilize her sharp wit and barbed tongue to get what she wants, for better or worse. The rest of the gameplay remains much the same, with the photograph mechanic from the first game replaced by Chloe tagging various objects or locations with graffiti.

The game consists of three episodes, which were released on August 31, October 19, and December 20, 2017, for Xbox One, PS4, and Windows via Steam. A Digital Deluxe edition comes with a few extra outfits, a mixtape mode, and a bonus episode titled "Farewell" which is about when Max leaves Arcadia Bay. A limited-run physical edition, released on March 6, 2018 alongside "Farewell", features all of the above plus Rachel and Chloe figurines, an art book, and a physical copy of the soundtrack on CD and/or vinyl. A MacOS and Linux port was released September 13th, 2018.

Be warned that this page contains unmarked spoilers for the first Life is Strange game.