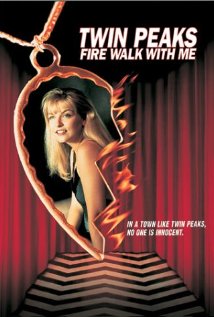 "And the angels wouldn't help you, because they've all gone away."
Advertisement:

Fire Walk with Me is the 1992 film prequel (and sequel) to Twin Peaks, and follows the events leading up to the death of Laura Palmer in the pilot episode. It is directed by the co-creator of the series, David Lynch. Production for the film started just after the series ended. The movie featured several cameos by characters from the series (including Kyle MacLachlan as Agent Cooper) and chronicled the final week leading up to Laura's murder and discovery in the series proper.

Released after the series' 1991 conclusion, the film follows two separate plot threads. The first, which takes place a year before the events of the pilot, follows a pair of FBI agents (Chris Isaak and Kiefer Sutherland) who are investigating the death of a waitress in the town of Deer Meadow. The second begins after one of the agents disappears while following up on a clue, the film cuts to a year later, where high school student Laura Palmer (Sheryl Lee) is balancing her perception as Twin Peaks' resident "good girl", a pair of boyfriends, hidden secrets and the unsettling behavior of her father, Leland Palmer (Ray Wise)...

The movie had a number of deleted scenes left on the cutting room floor, which were eventually stitched together years later as a standalone movie The Missing Pieces, included as part of the Blu-ray collection of the original series and released on a standalone disc alongside Fire Walk With Me under The Criterion Collection after the revival, The Return, finished airing. Lynch has described both Fire Walk With Me and The Missing Pieces as being helpful to explain the story of The Return, at least insofar as one can actually explain the story of a David Lynch work.

Fire Walk with Me provides examples of: