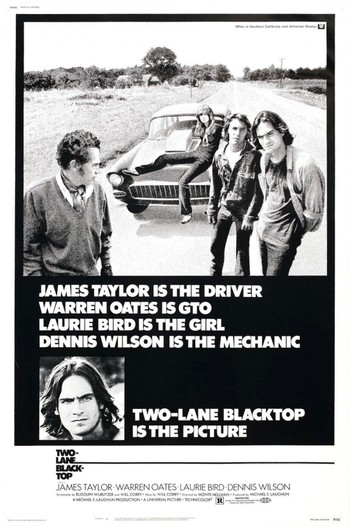 ...and this is the TV Tropes page.
Advertisement:

The sparse plot concerns two unnamed street racers in a 1955 Chevy 150, played by Taylor and Wilson, who get challenged to a cross-country race from New Mexico to Washington, D.C. by a mysterious and blustery stranger in a Pontiac GTO (played by Oates). Along the way, the racers pick up a young female hitchhiker (played by Bird), who enters into brief romances with all three men.

The film, which achieved Cult Classic status and is often cited as a product of the New Hollywood movement, is remembered for its minimalist and existential presentation as well as its portrayal of classic Route 66 car culture.