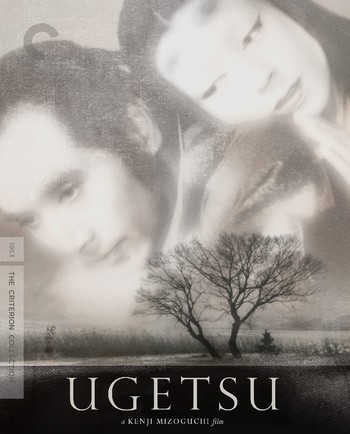 Ugetsu, aka Ugetsu Monogatari, is a 1953 film from Japan, directed by Kenji Mizoguchi.

Genjuro and Tobei are neighbors and brothers living outside the town of Nakanogo in early 16th century Japan, "a time of civil war". They are both farmers, but Genjuro also has a pottery business that his brother assists him with. Genjuro has the standard dreams of a peasant, to be richer and more successful, while Tobei has ambitions to become a samurai. Genjuro's wife Miyagi fears that his greed will bring harm to them and their son Genichi, while Tobei's wife Ohama finds his samurai dreams ridiculous.

Rampaging soldiers from the army that just lost the war force the two brothers and their family to flee. After the soldiers move on Genjuro returns to his home and is delighted to find that his pottery is intact. They set out across the lake to Nakanogo to sell Genjuro's wares, believing that route to be safer than overland with soldiers on the loose, but on the way they find a dying man in a boat who warns them of pirates, before he croaks. Genjuro returns Miyaki and Genichi to shore despite her objections, and the brothers then push on across the lake with Ohama. This decision eventually leads to disaster for both couples, but not before Tobei gets a chance to act on his samurai dreams, and not before Genjuro meets a strange, bewitchingly beautiful noblewoman, Lady Wakasa (Machiko Kyo).