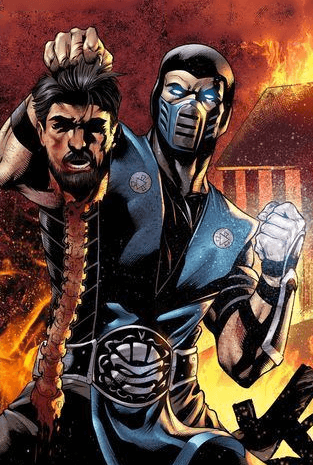 "A severed head isn't that gross. You just lack spine."
"Show the people my head. It's worth a look!"
— Georges Jacques Danton, before his execution
Advertisement:

Basically, a scene where, after killing someone, the victim's beheaded and their head is held up to demonstrate it.

Sub-Trope of Off with His Head!, which is about death by decapitation. This trope is about presenting the severed head in some way, be it by holding it up, or showing it stabbed on a pike, or throwing it casually to the one it is presented to, etc...

Human heads are not required. Any character engaging in this is an Anti-Hero at best, unless it's the head of something that doesn't look human whatsoever, like a dragon. In the latter case, the purpose of this trope is to show off the badassness of the character carrying the head. If it's a human head, it effectively shows that the character has no problem with killing people and often serves as a form of psychological warfare. An army engaging in this is nearly always evil and often very primitive.

Reality check: A human head weighs around 5 kg (or for those living in the US, 11 lbs.); however, few shows manage to portray this realistically. Of course, if someone had trouble carrying 11 lbs, they probably wouldn't have the physical strength to decapitate someone anyway.

Compare Dead Guy on Display, Human Head on the Wall, Alas, Poor Yorick. See also Severed Head Sports, where the humiliation to the beheaded is taken even further. Can be parodied with Losing Your Head if the decapitated somehow survives the beheading.

Example of:
Antagonist in Mourning