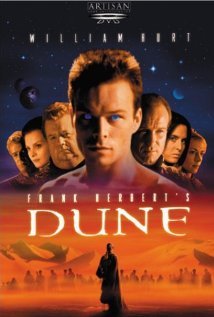 William Hurt does appear for a few minutes
''And so it begins. The trap is set. The prey approaches. A glorious winter is about to descend on House Atreides and all its heirs, and very soon, the years of humiliation visited upon my family will finally be avenged."
—Baron Vladimir Harkonnen

The Dune miniseries, billed as "Frank Herbert's Dune", is a television adaptation of the 1965 novel Dune by Frank Herbert, often credited as "the masterpiece of science fiction". The miniseries aired in the year 2000 on the Sci-Fi Channel. Its $20 million budget was small for a sci-fi blockbuster — especially since the three-part nature of the series functionally meant they were making multiple feature-length films — but was almost unprecedented for a series intended for an initial TV release. It received a significant marketing push (Including full theatrical trailers) as the Sci-Fi Channel tried to break into serious made-for-TV production.

While it was made on a much smaller budget and scale than the 1984 film version, the miniseries is generally praised for taking less liberties with the story and staying truer to the original book.

This adaptation is sometimes referred to as "the one with the hats" because of its use of flamboyant costume design to distinguish between the different factions within the story. This adaptation also notably expands the role of Princess Irulan to further drive the story and replace characters that weren't adapted over.

Dune stars William Hurt as Duke Leto, who despite top-billing is only in about the first third of the story. Alec Newman stars as Paul 'Muad'Dib' Atreides, with Ian McNeice as Baron Harkonnen and an international cast of actors.