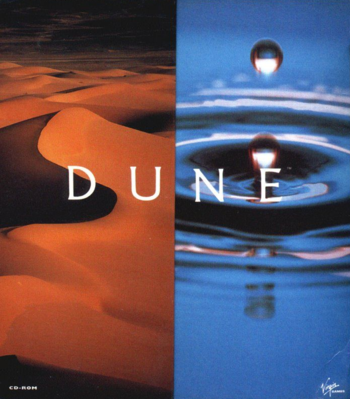 In these times of the future, man has explored many worlds, traveling through space by the use of the Spice. Spice is the most precious substance, it can be found only on one planet in the whole universe. That planet is Arrakis, better known as Dune. It's a dry desolate planet with vast deserts. There's never a drop of rain on Dune.
— Opening Cutscene
Advertisement:

Dune is a video game released in 1992 by Cryo Interactive. It adapts the plot of the novel by Frank Herbert, and takes a few cues from David Lynch's 1984 film adaptation.

The game's genre is difficult to quantify, having elements of point-and-click adventure, RPG, real-time strategy, and resource management. It was very well received critically, and can still be played today on some emulator software websites.

There was a CD edition released later, with improved graphics and some additional content.

Dune II, a pure Real-Time Strategy game, has absolutely nothing to do with this game beyond the Dune setting, despite being numbered as a sequel (it is only such because both shared the same publisher, and this game happened to come out a few months earlier).