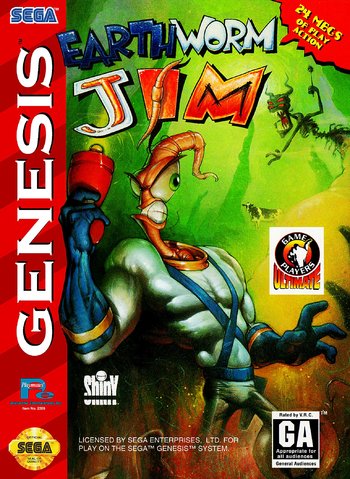 A much-loved 2D action-platformer from Shiny Entertainment, formed when Playmates Toys approached Virgin Software alumnus Dave Perry (who had developed Cool Spot and Aladdin for Virgin) to create a marketable videogame franchise to build a new multimedia sensation upon, in the spirit of their previous success, the Teenage Mutant Ninja Turtles franchise. The title character (created by cartoonist Doug TenNapel) is an earthworm mutated by a mechanical super-suit from space into a somewhat awkward super-hero, who takes it upon himself to stop the machinations of the Evil Queen Pulsating, Bloated, Festering, Sweaty, Pus-Filled, Malformed Slug-For-A-Butt and rescue the beautiful Princess What's-Her-Name. His adventure takes him from the scrap heaps of New Junk City to the sweltering fire-pits of Planet Heck (home of the aptly-named Evil the Cat) to Level 5, the lair of the evil Mad Scientist who invented Jim's super-suit, Professor Monkey-for-a-Head. All the while, Jim is pursued by Psy-Crow, Queen Slug-for-a-Butt's right-hand man who is intent on getting the suit back.

Yes. It's that kind of game.

True to Playmates' intentions of turning the series into a multimedia sensation, the series also spawned a cult-classic animated adaptation, a short-lived (3 issues) comicbook mini-series by Marvel, and a line of action figures to match, all of which fared significantly better than similar attempts such as Battletoads, Bubsy, or Cheetahmen.

In the sequel, Jim must traverse the galaxy again, this time to save Princess What's-Her-Name from a Shotgun Wedding to Psy-Crow. Jim's travels take him through the summer homes of many villains from the previous games, with such exotic locales as collapsing underground tunnels, intestines (while wearing a cave salamander costume), a carnival run by Evil the Cat, and a planet made up entirely of paperwork.

The third game, Earthworm Jim 3D for the Nintendo 64 and PC, had Jim taking a Journey to the Center of the Mind after one too many falling cows to the head. A Game Boy Color title, Menace 2 The Galaxy, was also released. Also, he appeared as Guest Fighter in the PC version of Battle Arena Toshinden (as Secret Character) and the ClayFighter games for Nintendo 64 (63⅓ and Sculpture's Cut).

The franchise struggled to revive itself, with a remake of the original game promised for the PlayStation Portable, but was eventually cancelled.

However in 2010 a remake of the original game, Earthworm Jim HD, finally made its way to the PlayStation Network and Xbox Live with enhanced graphics, sound, 4 player co-op, new levels and the option of the original Nintendo Hard difficulty for the purists. But oddly missing the secret "Who Turned Out The Lights?" level. Sadly, this version was delisted from all services in February 2018.

A new, fourth game, was rumored to be in the works, along with a new cartoon and motion picture, supervised by franchise creator Doug TenNapel; that didn't pan out, but Doug confirms that Interplay is interested

. In early 2017 the series, alongside Playmates' other properties, was sold off to investors. Earthworm Jim was priced around $10,000, but Doug confirmed that another game in the series will not be made without his (and a few others)'s assistance.

In 2019, Tommy Tallarico (who has since become the CEO of Intellivision) announced that a brand new entry in the series would be developed by ten members of the original team, reuniting them for the first time since 1995's Earthworm Jim 2, to be released exclusively for the Intellivision Amico sometime after its launch. While Doug has stated that he is simply volunteering to provide the team with consultation and ideas, he has also announced that he's working on a brand new 160-page graphic novel, Earthworm Jim: Launch the Cow, that would tell the never-before-seen story of the first game. It will be released exclusively through an Indiegogo crowdfunding campaign (seen here

), which met its goal of $12,000 within six minutes of its launch, and exceeded a whopping $700,000 when it ended, breaking the record for the highest-funded comic book on the site as of this writing.

that a second animated series, Earthworm Jim: Beyond the Groovy, was in development.

This game is the Trope Namer for: