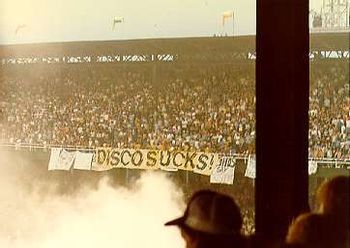 The exact moment this trope was born.
Angelica: Aunt Didi, what's disco?
Didi: Oh, nothing, sweetheart. It's something that happened a long time ago and it's never ever coming back, so don't you worry.
— Rugrats, "Garage Sale" note Ironically, the pilot of All Grown Up! was all about Stu and Didi competing in a disco dance competition.
Advertisement:

The full story of the decline of disco music in the United States is a long and ugly one that had huge ramifications on American pop culture for decades.

In the late 1970s, a genre of dance music emerged in the United States: disco. Mixing funk, soul, Rhythm and Blues, and rock, it rapidly gained popularity, especially after being featured in movies like Saturday Night Fever. However this naturally prompted a huge Hype Backlash, caused by a mix of class differences (the disco culture's high price of entry locking it off from everyone who wasn't an affluent urbanite), distaste from white rock fans and black funk fans (each of whom felt disco was "ruining" their music by mixing it with the other's), and sheer overexposure from too many bands and labels attempting to Follow the Leader at once. This culminated in the disastrous Disco Demolition Night, where a crate full of disco records was blown up at Comiskey Park by the Chicago White Sox in a publicity stunt supported by radio Shock Jock Steve Dahl, who lost his job at his old radio station after it switched to disco. This devolved into a riot, and the beginning of the end for disco.

By 1980, disco had become so unpopular that T-shirts were printed that said "Disco Sucks", musicians who took influence from or influenced disco had to do everything they could to distance themselves from it, and it became a stock punchline across popular culture. This trope is meant to reflect that point in time, referring specifically to moments in media when disco is used as a stock Take That! or Acceptable Target.

May overlap with Disco Dan — a character who's behind the times — if the work mocks them for literally liking disco. Rock is Authentic, Pop is Shallow may also come into play. Compare Rap is Crap for a later backlash against a genre of popular music.

This backlash was so pervasive from The '80s through the mid-90s that the Condemned by History trope was initially called "Deader Than Disco", and stayed that way all the way until early 2021. Since the late 90s onwards, however, this has become a Discredited Trope, as younger generations have grown up with no memory of disco or their parents' hatred of it, and thus look at the genre on its own merits. What's more, historians and scholars have argued that racism, sexism, homophobia, and xenophobia helped fuel the anti-disco backlash, too. A full account of the history of the backlash, the factors behind it, and its reevaluation can be seen on the Analysis page.

In a play on the phrase 'deader than disco', an explorer investigating an Egyptian tomb unwittingly sets off a mechanism that causes a mirrorball and disco lights to suddenly appear, with appropriately cheesy disco music playing in the background.

In a play on the phrase 'deader than disco', an explorer investigating an Egyptian tomb unwittingly sets off a mechanism that causes a mirrorball and disco lights to suddenly appear, with appropriately cheesy disco music playing in the background.